This is a history of the bikes I’ve owned 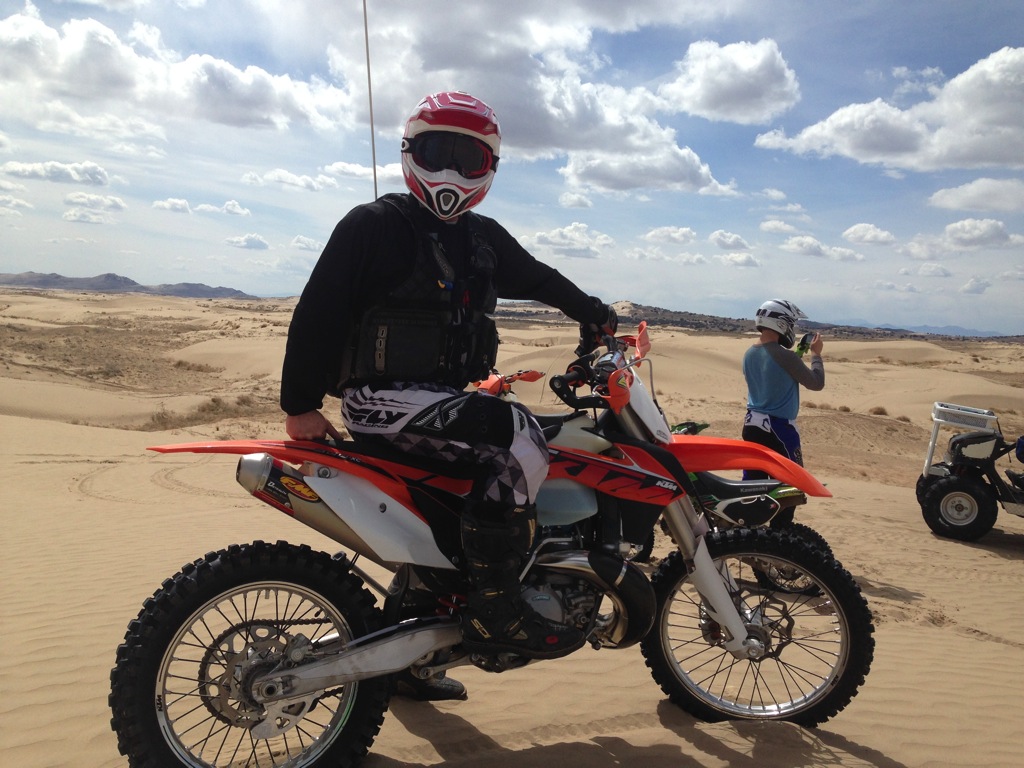 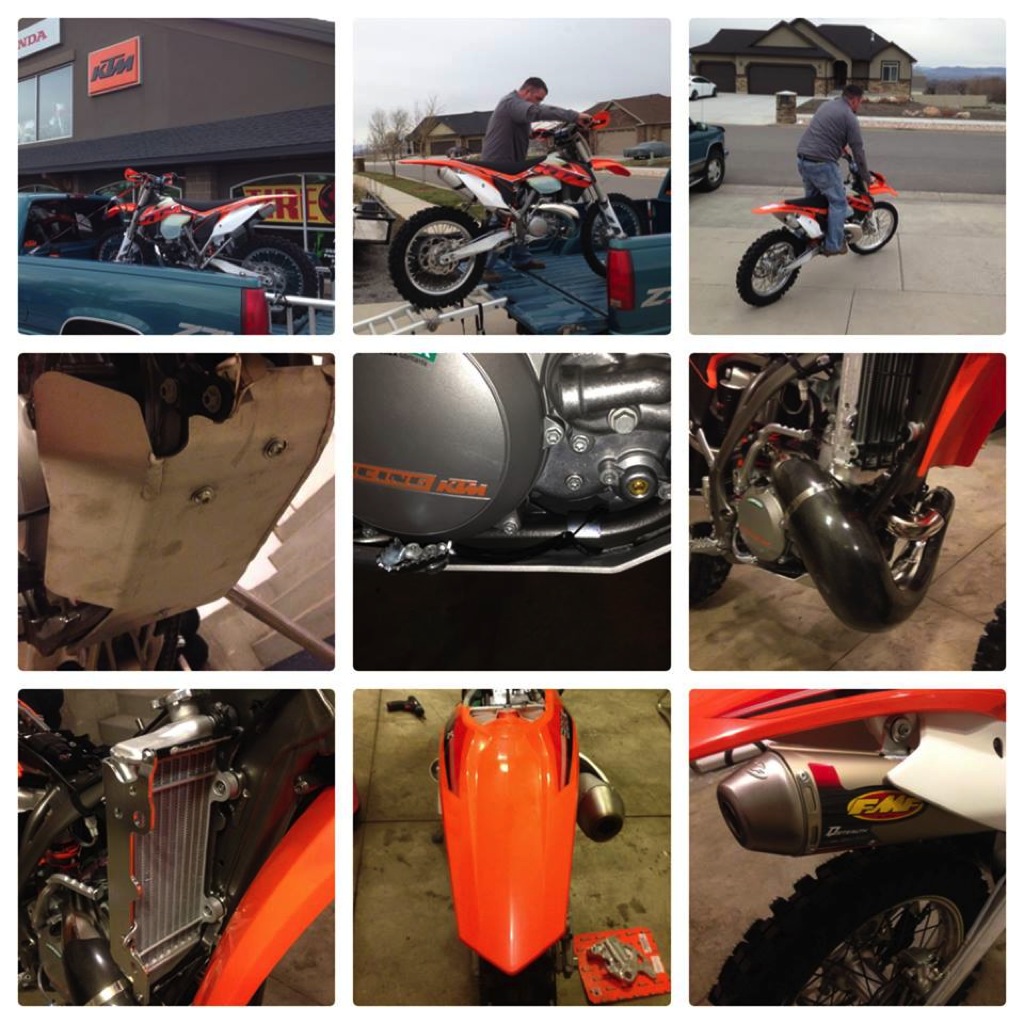 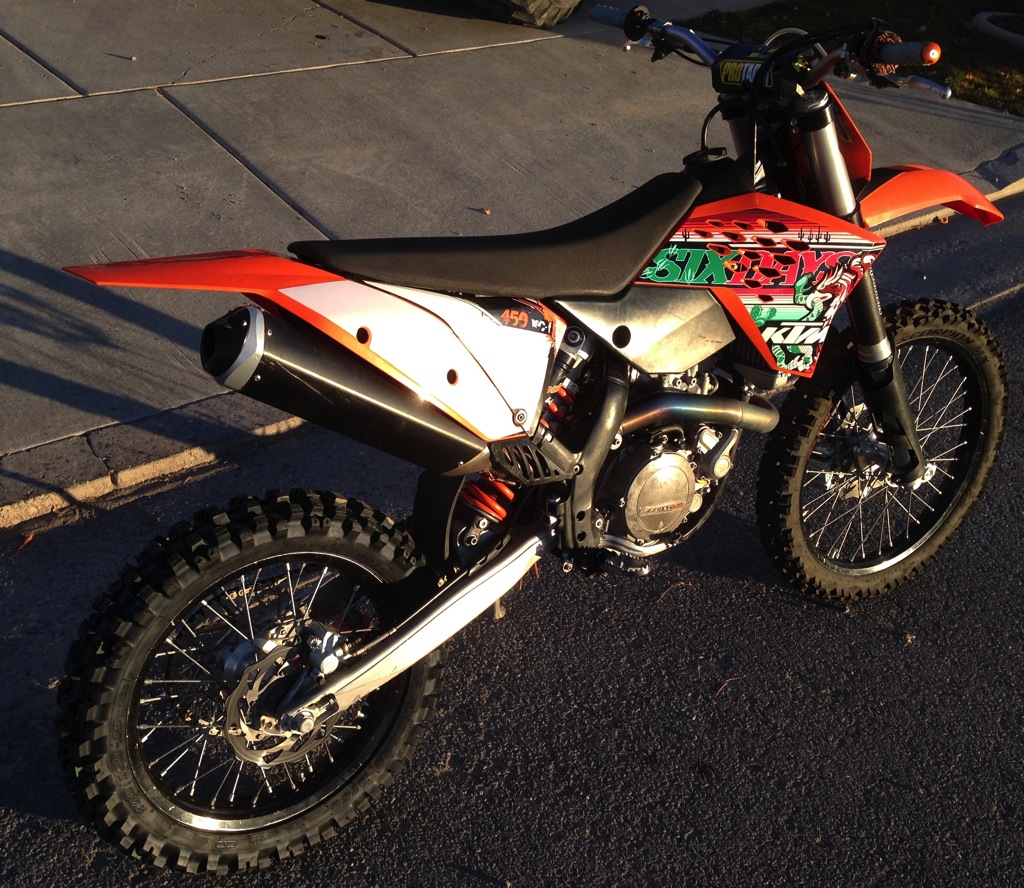 Review: I loved this bike. There was always more power than I needed, but it was fairly easy to manage. This bike was very reliable for me. Zac did a good job of dialing in the carb before selling it to me. Great bike! KTM adds a lot of extra quality to their machines compared to the other brands I’ve owned.

What I learned: This bike reinforced my desires for e-start and a kickstand that I was missing on my previous bike. The suspension was never as good as my Factory Connection suspension, but it was “good enough” that I didn’t want to spend to money to get it dialed in like FC can do.

Repairs: I put a new piston in it before putting it up for sale, I couldn’t believe how much more responsive and powerful it became. It reminded me of what it felt like when I bought it. Although I didn’t feel like it had lost a lot of power over the 3 seasons of riding, apparently it had gradually deteriorated as the rings wore down to slivers of what they were new. 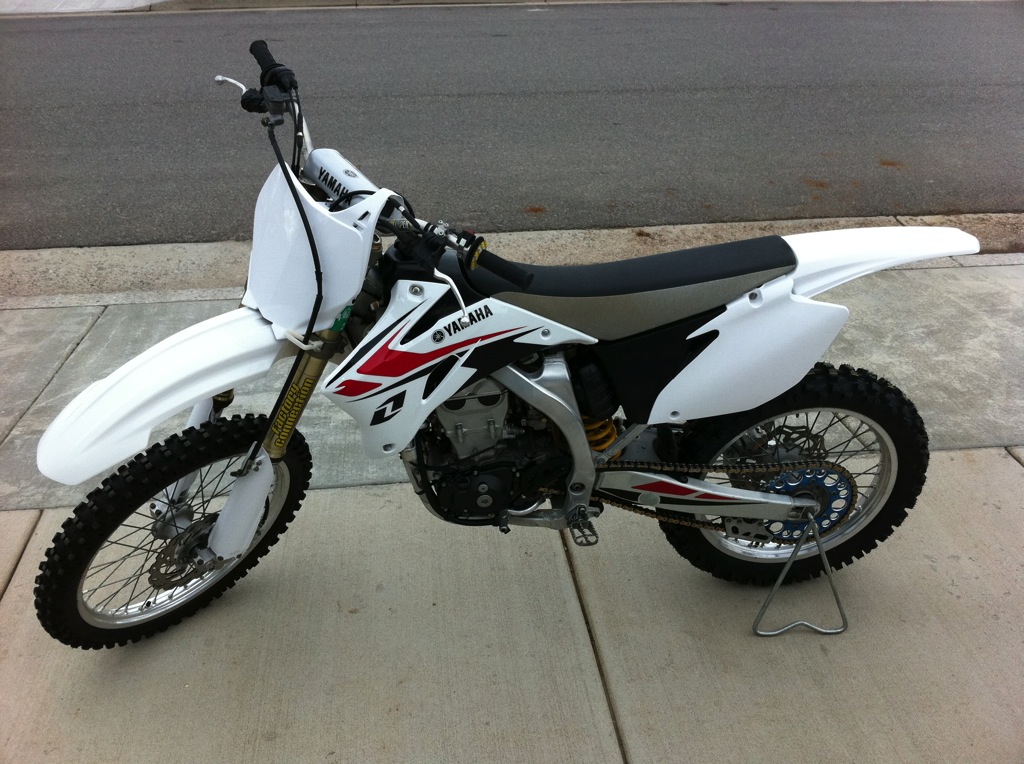 Review: I heeded some good advice from Cort, he said not to even ride it with MX suspension, just send it off and have FC do it right. I loved the suspension on this bike from day one, it gave me a lot of confidence in the gnarly stuff and I felt like I really started to learn how to ride a dirt bike on this Yamaha. This bike felt light and nimble with tons more power than I ever needed. It was very reliable and never gave me any problems.

What I learned: I really missed having electric start. Although this bike always started pretty easily for me, there are just certain situations (all situations actually) that I prefer just pushing the button… call me lazy or spoiled, but that’s it. I also missed having a kickstand, I ride with my kids pretty often and it was always a pain, especially when my kids would wreck, for me to lean it on something or lay it over and remember to turn off the gas. I found that I didn’t miss the light too much, I bought a nice LED mountain bike light that was brighter than the old stock light on my Honda.

Repairs: I put a new clutch in it before selling, but I believe that was it beyond regular maintenance. 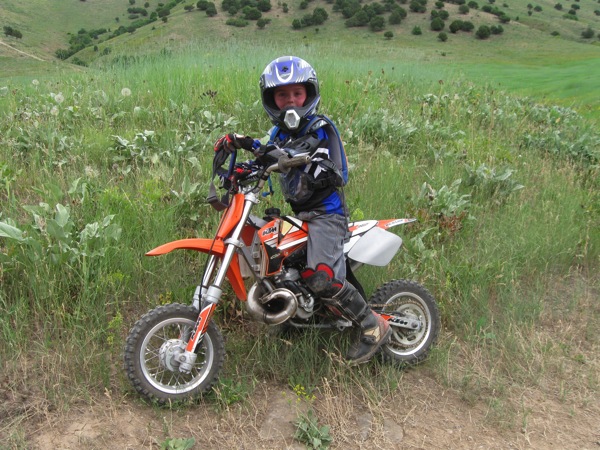 Review: We bought this for my younger son when he was 8 years old. He liked how light it was and loved the suspension the couple of times that I took him to the track. The problems came when we tried to ride it on the trails, no matter how much I tried to tune the auto-clutch, the power delivery was like a light switch… either on or off. He was either roosting the thing and washing out the rear or couldn’t lug it through the gnarly stuff. The gas tank was tiny, I think we got about 30-45min out of it and it was pretty messy with dripping black goo out of the exhaust.

We only kept this for a few months, then sent it on it’s way. 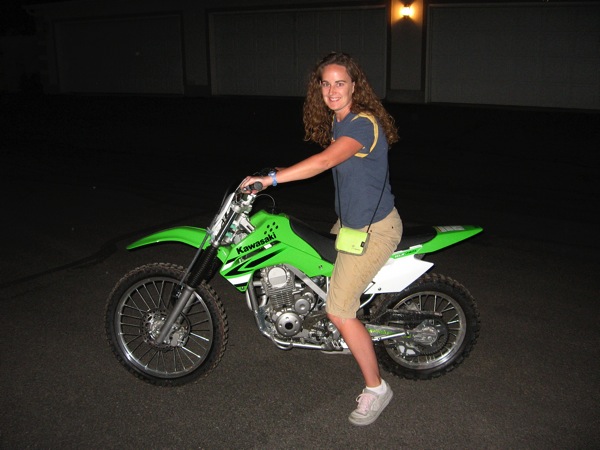 Review: This is another great little bike. I originally bought it for my wife, but after a couple of rides (I took her on trails that I shouldn’t have – hindsight 20/20) she decided that she’d rather just stick with mountain biking. This bike is really friendly and easy to ride, the e-start, easy clutch pull, easy power and disc brakes make it a great bike for anyone to learn on. It only got a few rides on it until Logan decided he was ready for it at 11 years old. It was a little heavy for him at first, but we’ve put some skid plates, fat bars and hand guards and he is now bouncing it through rocks and over logs really well. The rear shock is good, but I wish that it had inverted forks, may need to swap with a KX85/100 someday. 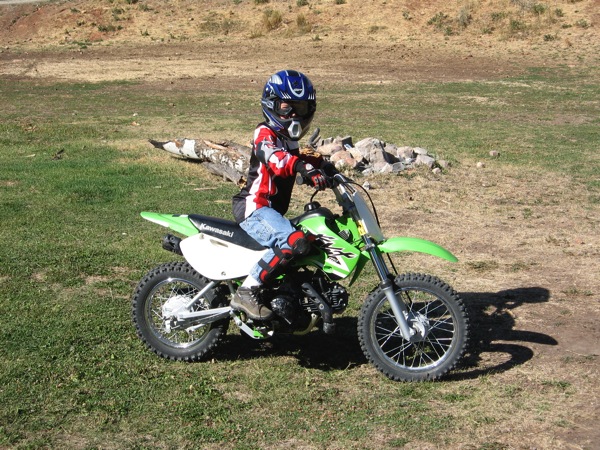 Review: This little bike is a workhorse, we bought this in 2007 and my older boy was 7 years old. He rode it for a few years until he was big enough to commandeer his mom’s 2008 KLX140L, then Landon started riding it and is still riding it this year at 12 years old. He’ll probably need to move up to the 140 after 2014. 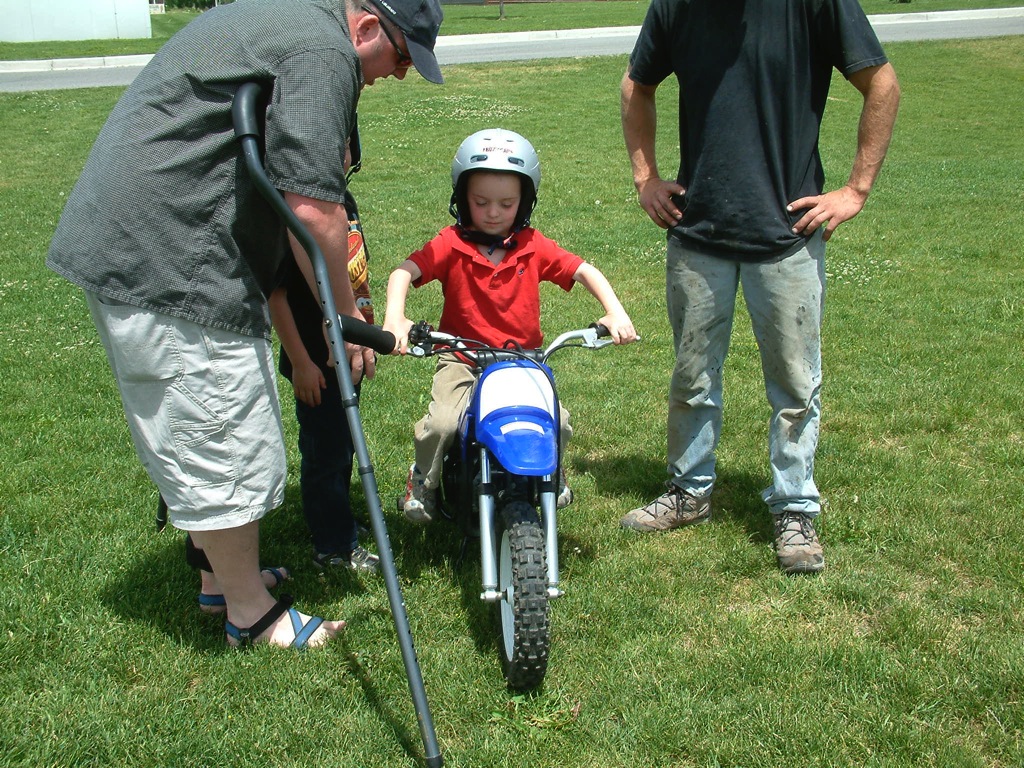 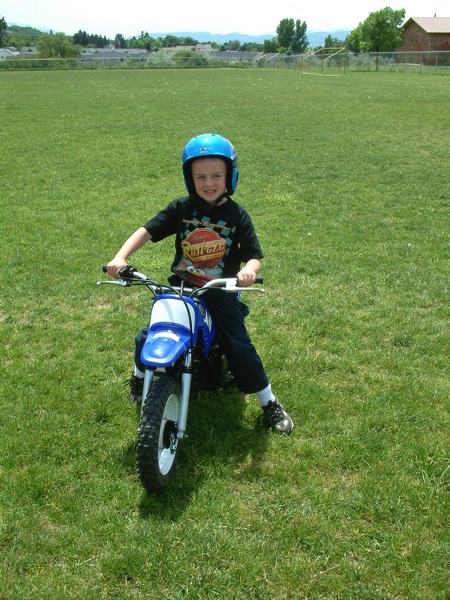 Review: This was a great little bike. I bought this when my boys were 6 and 4½ years old, both of them were able to ride it right off the bat. It was easy for them to learn on, no shifter or foot brake, just gas and hand brakes. It went fast enough to give me parental heart attacks, but was really low to the ground and forgiving when they would tip it over.

Other than a couple of oil changes, I never did any repairs to this bike and it was running just as solid the day we sold it as when we bought it. I think I sold it for the same amount I bought it for after 4 years of use, these kids bikes don’t depreciate like the big bikes. 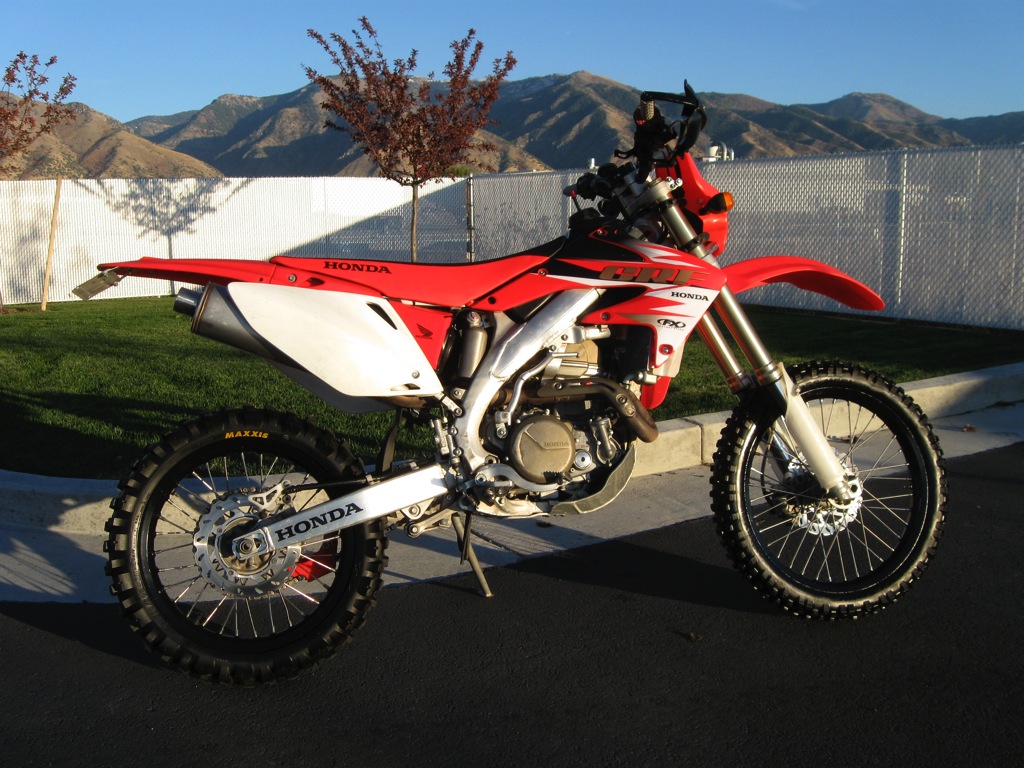 Review: This was a great bike to learn to ride again, it had been many years since I’d ridden dirt bikes and although this bike had tons of power, it was pretty forgiving. The electric start was a very welcome feature, learning to work the clutch resulted in many stalled engines, tip-overs on nasty side hills, and killing it in nasty steep rock gardens. The low first gear was nice.

What I learned: That I probably don’t have the proper discipline to own a street-legal dirt bike. It was just too tempting to hit the gas, I was constantly riding wheelies, jumping curbs. I came to the realization that it was only a matter of time before I ended up getting some expensive tickets or worse, ending up as a skid mark on some pavement. I plan to get a commuter bike that isn’t so tempting to hot rod.

Repairs: Ended up having to do a whole new top-end. I sent the head off to some guy off the internet in CA and it came back ruined. I finally purchased a brand new head, valves, piston, etc. to get it back in proper riding shape before I sold it.

This site uses Akismet to reduce spam. Learn how your comment data is processed.